What is an annuity

An annuity is a policy which converts a capital lump sum (e.g. your pension pot) into guaranteed regular (monthly) income payments.

Lifetime annuities continue to pay an income for the rest of your life, no matter how long you live.

There also temporary or fixed-term annuities which only pay income for a set period of time.

The most popular annuities by far in the UK are pension annuities and these have the following characteristics:

Jane Austen wrote “An annuity is a very serious business” in Sense and Sensibility.

In order to meet the income for life promise, annuities are based on the concept of mortality cross subsidy.

Actuaries calculate annuity rates assuming people will live until their normal life expectancy but some policyholders will die before they are expected to and some will live longer than expected.

Insurance companies make a profit from those dying early and a loss from those living longer, but they use savings from the early deaths to subsidise the income paid to those who live longer than expected - This is called mortality cross subsidy.

Mortality cross subsidy is unique to annuities and clearly favours those in good health who may live longer than expected at the expense of those who die early.

The person who purchases an annuity is called the annuitant, and the amount of income they receive depends on the following factors:

A basic annuity will stop making payments when the policyholder dies. In order to protect against the risk of losing out if the annuitant dies before getting a good return on the investment, or losing out to inflation, annuities have a number of options. These include; joint life, guaranteed income periods, value protection and escalation. 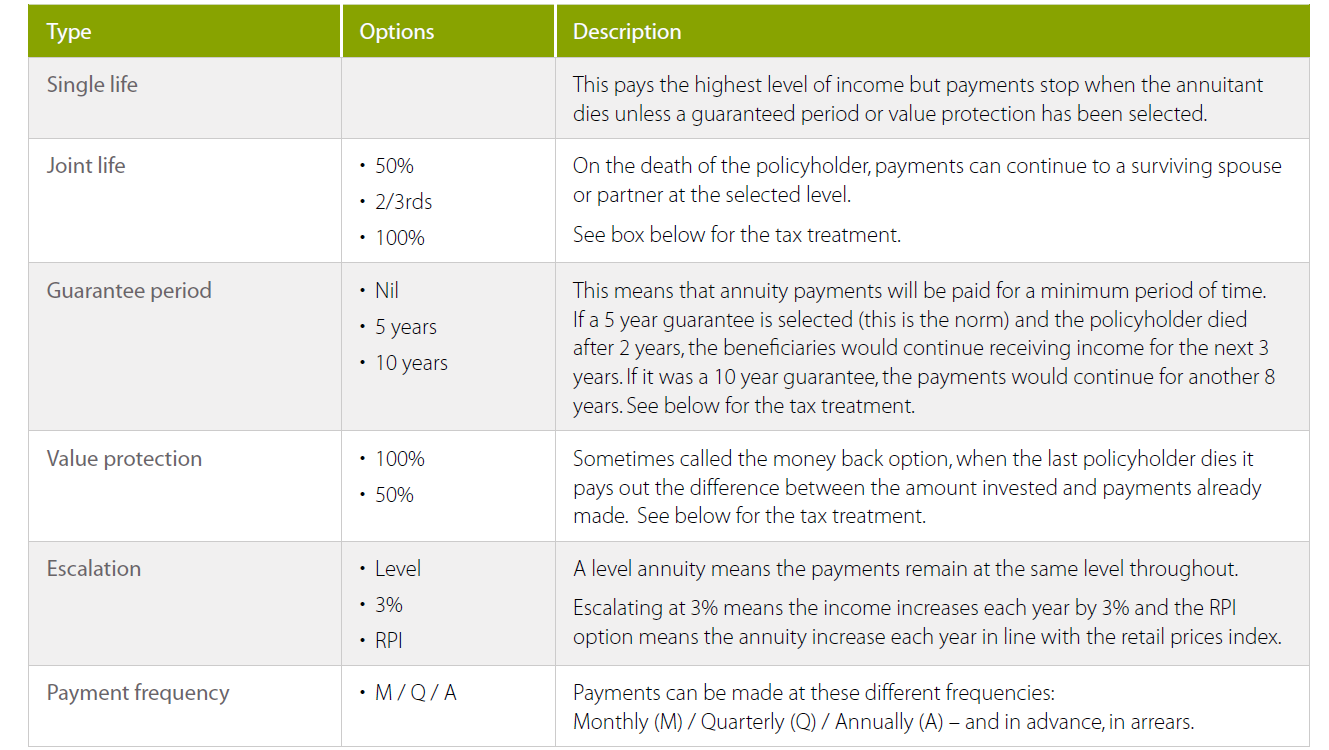 Annuities are very safe – there is no investment risk

In the UK annuity policies are issued by life assurance companies which are regulated by the Financial Conduct Authority (FCA) and the Prudential Regulation Authority (PRA).

This means that annuities are highly regulated and insurance companies must ensure that they invest their annuity funds in safe funds so they can always meet their future annuity payments. Therefore, annuities are one of the few financial products that provide an income guarantee.

Conventional annuities are known as “non-profit” policies. This means that payments are guaranteed as long as the company is solvent because there is no investment risk. If an insurance company were to be declared insolvent and was unable to pay annuity payments, policyholders are protected by The Financial Services Compensation Scheme (FSCS).

FSCS will compensate annuitants 100% of the total value of the annuity.

Policyholder protection is triggered if an authorised insurer is unable, or likely to be unable, to meet claims against it, for example if it has been placed in provisional liquidation.

However, if you have an investment linked annuity e.g. with-profits, unit linked or flexible annuity, the payments are not guaranteed in the same way.

The case for annuities

The case for annuities can be made very simply; they are the only policy that can pay a high level of guaranteed income for life. In this sense an annuity is a pension, and in the rush to give people more choice it is easy to lose sight of why people save for a pension in the first place.

A more sophisticated case can be made because annuities meet the needs and objectives of people who want to make sure that they will have a regular income for the rest of their life with the peace of mind and security that they will never run out of income.

In order to argue the case for annuities I will consider the following:

especially for those with a medical condition*

*While some commentators suggest the income from an annuity is not high, I will explain why I disagree.

1 The advantages of annuitisation

Economists, especially those in the US, have been interested in the concept of annuitisation (the process of converting a lump sum into income for life) for a long time and have argued that those who want to find the best way to stretch their income over their lifetime should purchase an annuity.

Ever since the US economist Menahem Yaari wrote about the life-cycle of a consumer with an unknown date of death but with the need to maximise income, annuities have played a central role in economic theory. Yaari showed how a consumer who did not need or want to leave money to the family, but wanted to get the maximum utility from their income, should annuitise their retirement savings.

If there were no annuities, people of pension age would be faced with two dilemmas when it came to taking an income from their pension pots;

'In the long run we are all dead' said the famous economist John Maynard Keynes, but how long is the ‘long run’?

It is often much longer than people think because many grossly underestimating their life expectancy.

It is generally acknowledged that many people of pension age underestimate how long they will live by between 5 to 10 years. This may have serious consequences for those trying to organise their own retirement income plans because it increases the risk of running out of income in later life.

The table below sets out the average life expectancy for men and women.

As we will see later, one of the reasons some people do not like annuities is that they worry that if they die (and their partner if it is a joint life annuity) soon after taking out an annuity, the capital is gone and there is nothing to pass on to the rest of the family. However, the advantage of an annuity is that if someone lives well beyond their normal life expectancy, they will not outlive their income.

3 A high level of guaranteed income for life, especially for those with a medica l condition

How high is a high income? The answer is higher enough to be more than on offer from other investments, but low enough to ensure that it can be guaranteed for life. At the time of writing, the annuity income for a 65 year old investing £100,000 in a single life policy was just over £4,600 per annum gross (September 2020). Put another away, it represents a return of 4.6% guaranteed.

Those with a keen eye for figures will spot that the reason why the return is so high is because annuity payments comprise part repayment of the original capital. Therefore it is not a like for like comparison with the income from an ISA or savings account. Never the less, there is no alternative that guarantees as high an income guaranteed for life.

Higher income for those in poor health

Those who smoke, take prescription medication or have been in hospital recently may be able to qualify for an enhanced annuity.

The table below compares the annuity income for a range of medical conditions.

The annuity critics are quick to point out the advantages of the alternatives such as pension drawdown or fixed term income plans where it is possible to take a higher income. This misses the point that an annuity pays a guaranteed income for life whereas the other polices (except unit-linked guarantees) do not guarantee an income for life and consequently the income could be less in the future.

Financial advisers point out the importance of ‘sustainable income’; i.e not only avoiding running out of income but ensuring that a certain level is maintained. An annuity is the only policy that ensures that a given level of income is sustainable. This means an enhanced annuity is still the best way for those in poor health to maximise and sustain their income for the rest of their life.

Strictly speaking, a sustainable income should increase in line with living expenses and an inflation-linked annuity does exactly that.

An essential part of retirement income planning is arranging an individual’s financial affairs to meet their longer term objectives. However, many people have difficulty in setting out their objectives and there are normally two reasons for this.

Secondly, behavioural finance shows that most people value more money now as opposed to more money in the future.

Many people recognise the importance of having enough income throughout their retirement but often struggle to express exactly what their retirement income objectives are. For most people, income requirements may include: